Writers who reference these things frustrate me.

I believe in the power of sitting my lazy butt in the chair in front of my computer and forcing myself to work, however much I don't feel like it. I believe in Momentum.

Princess Alethea's First Law of Writing Momentum: A writer at rest stays at rest. A writer in motion stays in motion, unless acted upon by an outside force.

And boy, can the Universe dole out some forces.

In the last nine months, I have dealt with a lion's share of this crap--literally nine months from the posting of this blog--it started with driving my sister to Baltimore on Christmas Day so that she could have emergency spinal surgery at Johns Hopkins. Since then I have dealt with the illness and recovery of both my parents, and the death of my significant other's grandmother. I then broke up with that significant other (when you are told enough times that you are a selfish freeloader and that you should get out, eventually you do) and moved from DC to Florida...but not before having my fairly successful YA series dumped by my publisher. Not long after that came the death of my dear friend and inspiration Jay Lake...and just when I finally felt like I was getting my life back in order, my nephew Josh died. He was 25. We still have no idea what happened. We may never learn all that we wish to know.

I explain this not to garner sorrys or sympathy--I don't want them. I am beyond tired of all that. I would like my life to go on, please. I'm still in Vermont; I accompanied my big sister (Josh's mom) to her workplace today and sat down at my computer. We thought that by working together we might encourage each other to accomplish more. Cherie is catching up on paperwork. I'm revising a novel my agent is very excited about.

I'm on Chapter One.

I've been on Chapter One for a week.

Ten minutes ago, we got a call that my nephew Caleb was in lockdown at his school most of the day. Some lunatic walked into the gas station in the middle of Morrisville, shot the clerk four times, and is now loose in town. With a gun. Caleb is safely at home. We will not be opening the Bijou Cineplex tonight. Cherie and I are still in Burlington, with a lot of work to do.

The Chaos of the Universe has followed me around for a large chunk of my life, and I've been a good sport about it so far...but you have to admit, this is a little ridiculous.

Yes, I am grief-sick. Yes, I am tired. But I got out of bed and dyed my hair this morning. I took pictures of the leaves on the trees so that my friends might witness the beauty of Vermont when she moves into Autumn with all her magnificence. Inside I quietly hope that my Universe gets less chaotic, but I'm not counting on it.

I am a writer. Futile or not, insane or otherwise, it is my decision to fight this good fight. And it is me fighting, not The Muse or Divine Intervention or anything else. I am the one sitting here clad in my armor of words, pen brandished mightier than any sword, prepared to write stories that move mountains. And if they don't move mountains, they will at least move me....one more sentence forward. One more sentence forward. All the way to the end.

And then I shall open another document and do the same thing all over again, Universe bedamned.

I have to go to work.

You kids be good now, and read lots.

Soteria and I–though this weekend we were “Sami and Leelee” again–went to visit our French Grandmother in hospice yesterday. (Montpelier really *is* over the river and through the woods.) We played Rosemary Clooney songs, and danced, and smiled a lot, and yelled, “Nazi Oxygen Tanks!” at each other whenever we started to tear up.(We discussed the prevalence of reused swastika-bearing oxygen tanks while waiting for the nurses to get Memere ready.) I kept pinching myself and thinking, CUT IT OUT, CRYBABY, THIS IS PROBABLY THE LAST TIME YOU’RE GOING TO SEE YOUR GRANDMOTHER. SUCK IT UP. Didn’t work very well, though. I only managed to whisper “I love you” in her ear before losing it in the hallway on the way out.

Memere doesn’t really remember us anymore, or talk much, for that matter, but a few words that came through loud and clear were “Beautiful”, “Happiness”, and “Crazy.” I think that sums us up pretty well. And we get all that from her.

Afterwards, we drove out to DeRonde Road (which was named after my grandmother–Madeleine DeRonde). We parked beside her old house and then literally walked down Memory Lane (now called Barnes Road) to the Morse Farms Sugar Shack. Soteria and I and our friends Sarah and Stephanie all used to get kicked out of there for sampling a bit too much maple syrup…but I sampled it all again this time, because I didn’t think they would recognize me. (Though Soteria is fairly sure they have all our pictures still on the wall in the back room under a WARNING sign.) We bought maple creamies for the walk back, to sooth the soul. It’s so quiet and peaceful up there, and it smells like fresh-cut grass and Queen Anne’s Lace and milkweed and memories.

There’s a full moon tonight, and Mom shared a tradition with me that I wasn’t aware of before. Empty your purse/handbag out under the full moon and hold it up to the moon’s light and say, “Fill it up!” seven times.

If you do this, then you will receive an unexpected windfall (found penny, refund check) before the next full moon.

Did you guys know this one?

[Edited to add: oops -- the full moon is on Friday. But now you know way in advance. Get your purse ready.]

I certainly can’t complain about the scenery. Or the peace and quiet.

Today’s the day! Wish me luck with the family and the insanity. And wish my niece Alana luck–she’s the one getting herself into this.

Heading out to Morrisville this morning–not sure if I will have phone & internet service or not. But I will have a black raspberry creamy and a trip to the Bijou, for sure.

Have a great Saturday, everyone! Xox

I am in Vermont this weekend for my niece’s wedding. It is good to be home again in my green mountains where the air just smells better than the rest of the world.

Of course, it’s still a wedding. Which means drama. I’ll deal with that tomorrow.

…but first I have to put in a shift at the bookstore.

That’s right, kiddies — this afternoon, I am headed back to Tennessee, for far less time than I’d like to stay, of course. One day I’ll kick the renter out of my house and use it as a winter home, but for now I must (finally) move my worldly possessions to a giant storage unit in VA.

But before then I will have homemade cornbread. I will get ribs from The Slick Pig and cornbread muffins from Calypso Cafe. I will sign books at Hypericon. I might even stop by the Smyrna Library. I am bringing the Fairy GodFamily, you see, and I am anxious to show off my former life.

What I regret the most, of course, is that one day next week I will be driving into the parking lot of the Job That Shall Not Be Named (because They like to Google Themselves and then pass around inter-office memos about it), but I will not be able to go inside and hug every single one of those people I miss. (Thank the gods for Facebook.) This is a bridge I burnt myself, so I have no one to blame but me. I just hope everyone in that building (they know who they are) knows that I love and care about them and think about them all the time and miss them like crazycakes, and so long as I have the address I will continue to send Christmas CDs, because it’s tradition.

If there’s one thing I learned from my life in Tennessee, it’s tradition.

Lord, how I miss my little house. I wonder if the roses are still blooming. 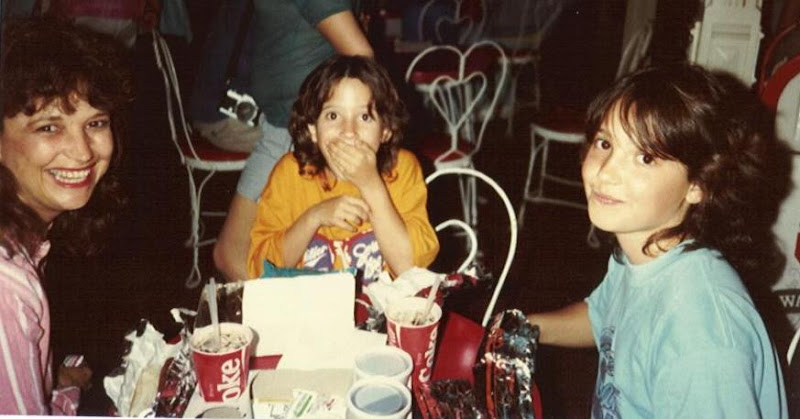